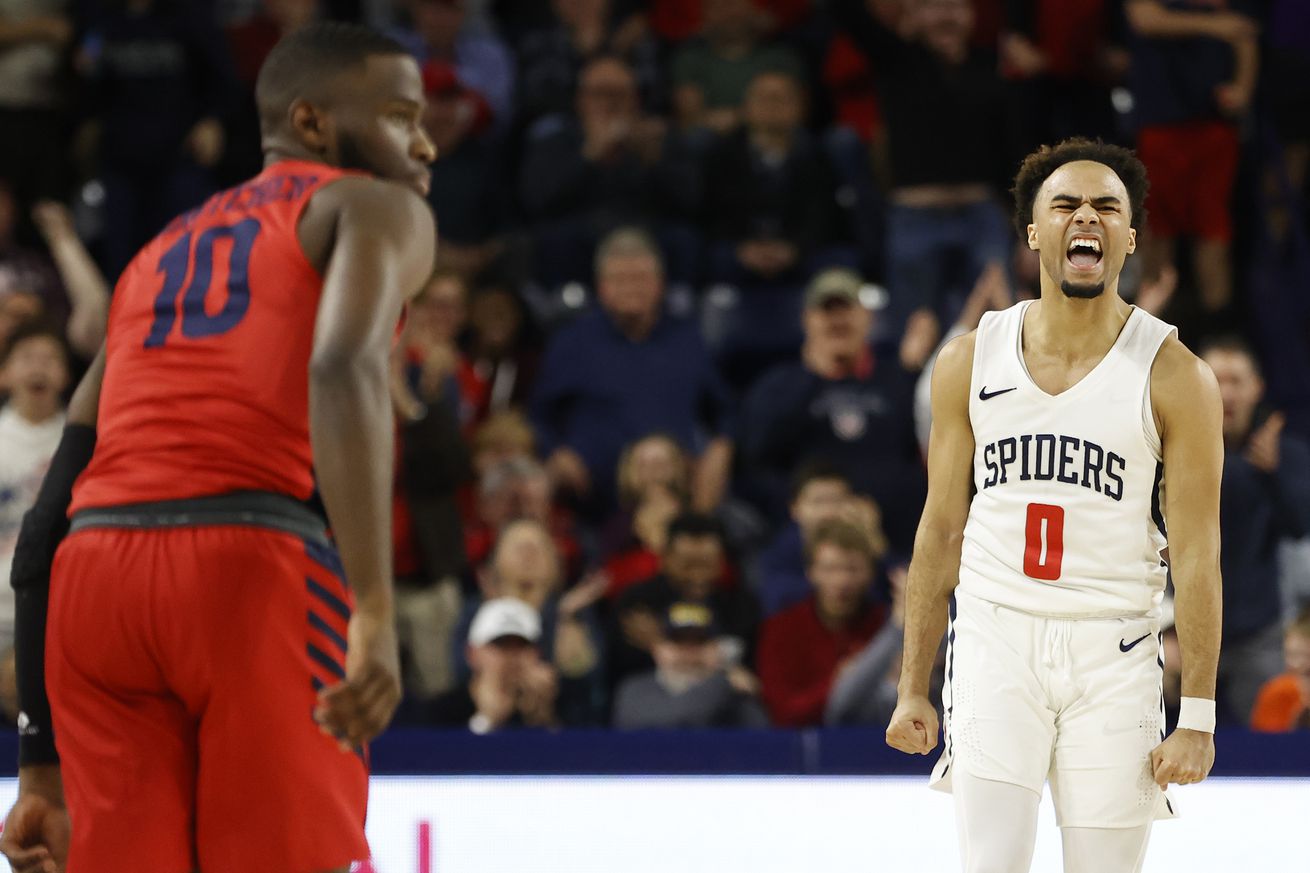 The No. 4 seeds have been revamped and plenty of newcomers are added to the field in our latest bracketology update.

While “balanced” and “unpredictable” have been the two adjectives used the most when describing the 2019-20 college basketball season, I’m going to throw in a third, far more contradictory one to describe the race for the NCAA tournament bracket’s four No. 1 seeds.

For the fifth week in a row, the same four teams hold down the regional anchor spots, still in the same order the Selection Committee announced Feb. 8, first applied here seven days ago:

The 23-1 Baylor Bears, No. 2 in the NET, ranked first overall and placed in Houston’s South regional.
The Bears’ closest Big 12 rivals, the 22-3 Kansas Jayhawks, fourth in the NET but boasting 10 Quad 1 victories, seeded second overall and placed in the Midwest regional in Indianapolis.
The WCC-leading Gonzaga Bulldogs, 26-1 and the NET’s third-ranked squad, anchor the West regional in Los Angeles.
Finally, the nation’s lone undefeated team, the San Diego State Aztecs, 25-0 against Division I opposition and atop the NET table. As the fourth overall No. 1 seed, they’re assigned to the East regional in New York.

And you could argue that the stability of the top line is creeping into the two line, as the Duke Blue Devils, now atop the ACC standings, and Dayton Flyers, 23-2 and a perfect 12-0 in Atlantic 10 play so far, have cemented themselves as the bracket’s fifth- and sixth-ranked teams. 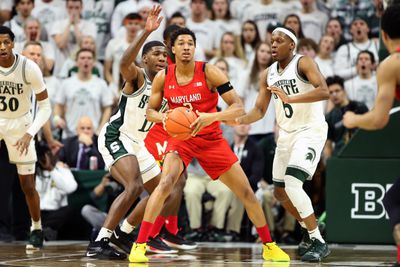 Mike Carter-USA TODAY Sports
Look for Maryland to make a serious push toward the top line over the season’s final weeks.

But the two teams ranked immediately behind Duke and Dayton are positioned to chase both of them down and potentially pass San Diego State on the top line. First, the Maryland Terrapins moved to 21-4 overall and seventh in the NET after Saturday evening’s thrilling road victory over the Michigan State Spartans. That was the Terps’ eighth straight win. Bolstering their case, Maryland’s final five games (after Tuesday’s visit from Northwestern) are all set to be profile-boosting Quad 1 contests. Then there are the Florida State Seminoles, also sitting at 21-4. Leonard Hamilton’s club has only lost to Duke and Virginia (both on the road) since the New Year, and their most difficult remaining game, against Louisville, comes in Tallahassee. However, the weakness of this year’s ACC might limit the Seminoles’ ceiling, a deficiency reflected in their NET ranking of 15th — eight spots lower than Maryland. However, if FSU can win the ACC tournament title? That result could be a game-changer for the ‘Noles.

But once you get away from the top two seed lines, the boredom suddenly vanishes and this season’s trademark wackiness returns with a vengeance. 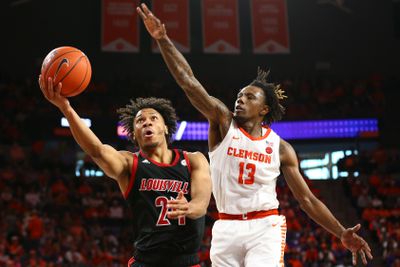 Three of today’s No. 3 seeds lost two games over the last week. Louisville lost its spot on the two line after dropping back-to-back road contests to Georgia Tech and Clemson Tigers. The Seton Hall Pirates fell to the Creighton Bluejays, now a four seed, in a thriller in Newark on Wednesday, then dug themselves too deep of a hole at Providence on Saturday. Then there are the West Virginia Mountaineers, who failed to score in the final five minutes of Kansas’ midweek visit, then lost by 11 at Baylor on Saturday. This week’s new No. 3 seed, the Villanova Wildcats, were the exception, as they defeated Marquette in Big East play, then finished off a 4-0 Big Five campaign by defeating Temple on the road.

Villanova replaces Auburn, who drop to an all-new four line. While Bruce Pearl’s team was able to avenge an earlier loss to Alabama on Wednesday, Saturday’s 85-73 loss at Missouri wasn’t a great follow-up. Creighton, an Oregon squad that swept past Colorado and Utah, and Penn State, winners of eight in a row, fill the remaining places in the top 16.

After today’s full bracket and rundown, I’ll take a look at the cut line and explain why one of this bracket’s new entrants finds itself somewhat safely above the fray.

Note: New entrants are marked with an asterisk (*) and arrows indicate a team’s movement up or down the bracket.

Placing the No. 4 seeds in today’s bracket was a challenge, as Creighton cannot play In Omaha over the first weekend and the Bluejays also had to be separated from Seton Hall and Villanova. To preserve the appropriate amount of balance between the regions, I put Creighton in the West and Oregon in the Midwest, when the two could have been placed in their natural regions.
There are some truly spectacular potential second-round matchups here: Auburn-Butler, Villanova-Ohio State, and Maryland-LSU in the South; Oregon-Michigan State, Dayton-Wisconsin, and Louisville-Iowa in the Midwest; Creighton-Colorado, West Virginia-Marquette, and BYU-FSU in the West; Penn State-Kentucky, Arizona-Seton Hall, and Duke-Michigan in the East.
But some of those matchups might never happen because of stacked first-round pods. Both Butler and Auburn would be pushed in their projected opening matchups, against Yale and North Texas. Ohio State would need to get past 2019’s champs to reach the Round of 32. Iowa and Marquette would both need to defeat dangerous First Four winners. Colorado and Kentucky would face potentially tricky No. 5 vs. No. 12 games, while Penn State is paired with a Stephen F. Austin squad that won at Duke.
This week’s top-two Elite Eight matchups would likely start in Los Angeles on Saturday with Gonzaga and Florida State meeting for the third straight year, then a Kansas-Dayton Maui rematch in Indianapolis. Sunday’s doubleheader would tip off with Baylor and Maryland in Houston, followed by San Diego State-Duke at Madison Square Garden. 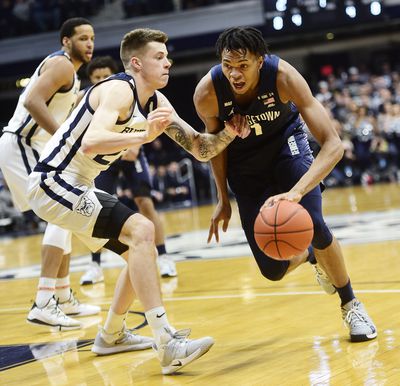 There are three new at-large entrants in today’s bracket and a new American Athletic Conference leader, the Cincinnati Bearcats, filling a fourth such spot. And while the Richmond Spiders, completely new today, and East Tennessee State Buccaneers, who first entered the projected field in Friday’s bubble update, sit just above the cut line, today’s fourth newcomer, the Georgetown Hoyas, find themselves as the top No. 10 seed. This is particularly impressive since Patrick Ewing’s squad was the ninth team out on Friday.

The Hoyas’ rise illustrates how narrow the margins are near 2020’s cut line and how quickly things can change this season. For starters, Saturday’s impressive, unexpected win at Butler was Georgetown’s second top-20 win. Plus, recent improvement by two of the Hoyas’ non-conference opponents, SMU and Oklahoma State, have resulted in Georgetown picking up two more Quad 1 wins, moving their record against that group to 5-9. And with the Hoyas’ NET now ranking 46th and their profile lacking any truly bad losses, it’s no surprise they made a quick jump to relevance.

It’s a similar story for Richmond, which edged out Alabama — despite a loss in Tuscaloosa — an Arkansas club that’s lost four straight and an Indiana squad that’s just won once in its last six outings to secure today’s final at-large. While the Spiders recorded a dominant home win over archrival VCU on Saturday, it’s their work away from the Robins’ Center that’s boosted them above their power-conference competition. Sure, Chris Mooney’s team defeated Wisconsin in the Legends Classic before Thanksgiving, but it also has a 7-2 record in true road games, highlighted by a 69-61 victory on the home floor of the Atlantic 10’s second-best team, Rhode Island. On the other hand, Alabama is 3-6 in true road games, Arkansas 4-5 and Indiana a woeful 1-6.

Of course, things could very well change for Richmond — and several other teams — by the time Friday’s bubble update arrives. In the meantime, you can check out my nightly TV previews on Blogging the Bracket and listen to my bracketology interviews on the College Basketball Coast to Coast podcast and SB Nation Radio’s Pushing the Odds with Matt Perrault.

It feels like 2020 just got started, and yet somehow here we are at the …
Home Improvement Videos
More