Have you ever tried to have a conversation with someone who mumbles his responses, doesn’t make eye contact, and slouches in his chair? You have to work hard at it, and it’s often unrewarding. 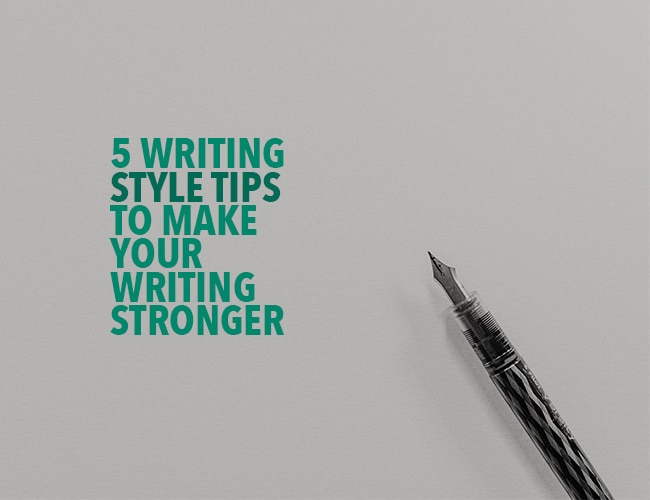 Isn’t it easier to talk with someone who sits up and gives you his attention, looks right at you, and speaks his answers clearly? It requires less effort on your part and is primed to yield results.

Weak writing is like that first guy. It makes it harder for readers to follow the story and doesn’t hold out much hope for a satisfying experience. It’s tempting for readers to close the book and move on.

Strong writing commands attention and respect, setting up the expectation of a good story to come.

Apply These Rules, but not With an Iron Fist

I’ll discuss five writing style tips you can use to make your writing stand up strong, but I want to point out that there are times and instances where you might choose not to use them. Wise man say learn rules so you know when to break them.

Use these rules as effective guidelines, but apply them with a judicious hand, not a robotic mindlessness. The best way is to practice them until you internalize them, making them part of your writer’s toolbox. When that happens, your subconscious, creative brain will use them automatically in natural and appropriate ways.

You will also notice that these rules cross over into each other. That’s because they all work together to accomplish clear and compelling prose.

The Road to Stronger Writing

Ready for the five writing style tips? Here we go:

Unless weakness is the effect you’re going for, avoid using weedy, sprawling constructions. Work, instead, to achieve economy and strength through efficient word choice.

Instead of: He was born early in the evening and people the world over were glad at the news.

Try: He was born at dusk and the world rejoiced.

Instead of: She rinsed and chopped the carrots on the chopping board and then went to the refrigerator for the onions which she also chopped, tossing the vegetables into the salad bowl on the counter.

Try: Rinsing the carrots, she chopped them and added an onion, tossing the vegetables into the waiting salad bowl.

“Sometimes, the simplest way to say something is the best way. Look for efficiency in your word choice.Tweet thisTweet
2. Use descriptive words

Rather than weak, generic words that don’t do much for the reader, use words that create a picture or evoke emotion.

Instead of: She sat in the chair.

Try: She sprawled OR perched OR poured herself into the wingback chair.

Instead of: Pain filled Mark’s head.

Active voice imparts a sense of motion and adds interest. It’s like the second guy in my opening scenario—a lot more engaging. Watch out for too many instances where you use “was” and “were” when a stronger word choice would vitalize your writing.

Instead of: The pay Jim received was low.

Instead of: The sewing machine was run by Jemimah.

The details you use will form impressions in your reader’s head, so be careful to paint what you want them to see. Beware of using “fake” details, words that lead your readers down a false path.

For example, if you wrote: “The girl walked a dog on a leash,” your reader may envision a poodle and when, in the next paragraph, you write about how her Cocker Spaniel stopped to lift a leg, you’ve cracked the image in your reader’s mind, pulling them out of your story. If you plan to repeatedly mention a detail, specify it the first time.

Instead of: tree, car, dinner, disaster, some

Writing things in a positive way—expressing what is true rather than what isn’t—can present a clearer, more compelling vision for your reader. Remember, you’re working to build trust, so whenever you can be truthful and straightforward with your reader, it’s a good thing.

Instead of: She was not a gracious woman.

Try: She was a dragon lady.

Instead of: The garbage truck was not the ordinary size.

Try: The garbage truck was a monster.

Instead of: Her cooking was not the best.

When your writing is more like the guy who sits up in his chair, makes eye contact, and speaks directly, it’s a lot easier and more rewarding for readers to engage with it. Invite your readers to spend more time with your stories by using these rules to strengthen your writing.

Do you see how using these writing style tips can improve your writing? Have you ever struggled to read something where the writing was weak? Tell us about it in the comments.

Let’s practice these five rules. For each rule, I’ll give you two sentences, and you use the relevant rule to reconstruct the sentence so it’s better and stronger.

Brad hit angrily at the wall and walked back and forth, shouting loudly.
On the day Ginger got married, it was hot and humid and there were lots of black flies buzzing around to ruin the outdoor reception by the duck pond.

Fred walked home through bad weather.
In the fifth inning, Tara hit the ball into the field.

The car was driven by Marilyn as we were traveling around the country.
Four touchdowns were made by the home team while we were cheering from the stands.

We painted the house blue.
Some businessmen signed up to take the class.

In the produce department, there were no watermelons left.
The atmosphere in the room was not cheery.

Write for fifteen minutes. When you are finished, post your work in the comments, and don’t forget to provide feedback for your fellow writers!

The post 5 Writing Style Tips to Make Your Writing Stronger appeared first on The Write Practice.