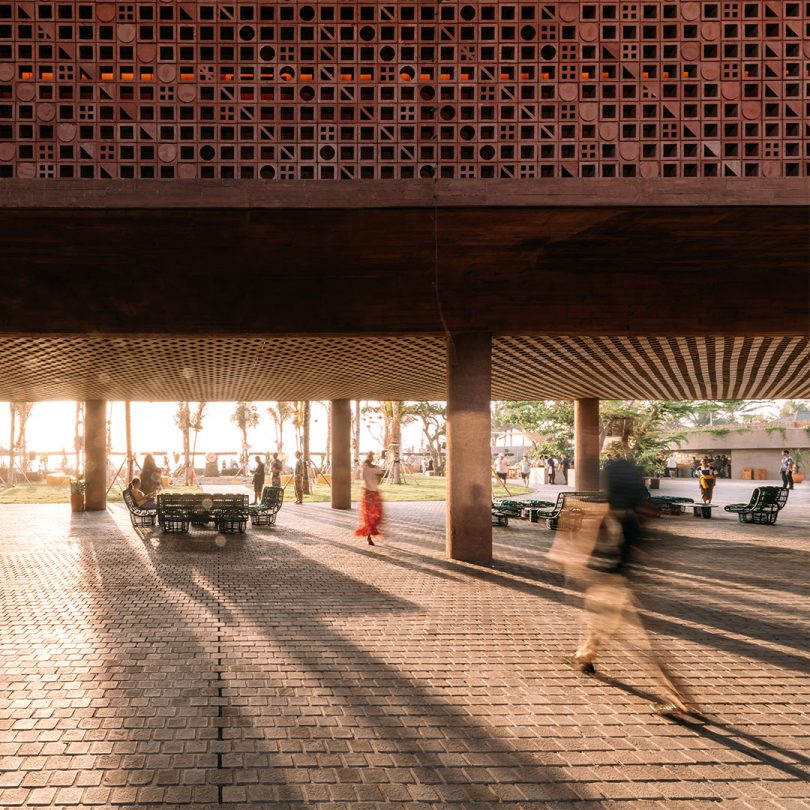 Desa Potato Head, comprising a beach club and two hotels, has opened in Seminyak, Bali – a couple of kilometers north of the tourist magnet of Kuta. 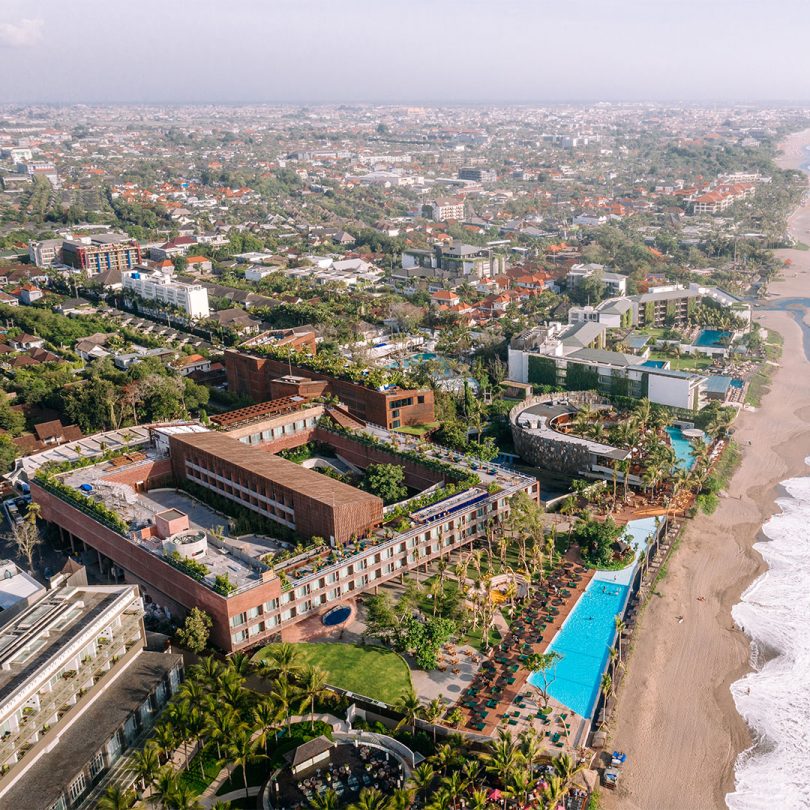 Designed by Dutch architect Rem Koolhaas’ firm, OMA, it is designed not only for guests but also for the local community, challenging the model of self-contained exclusivity typical of resorts in the region. 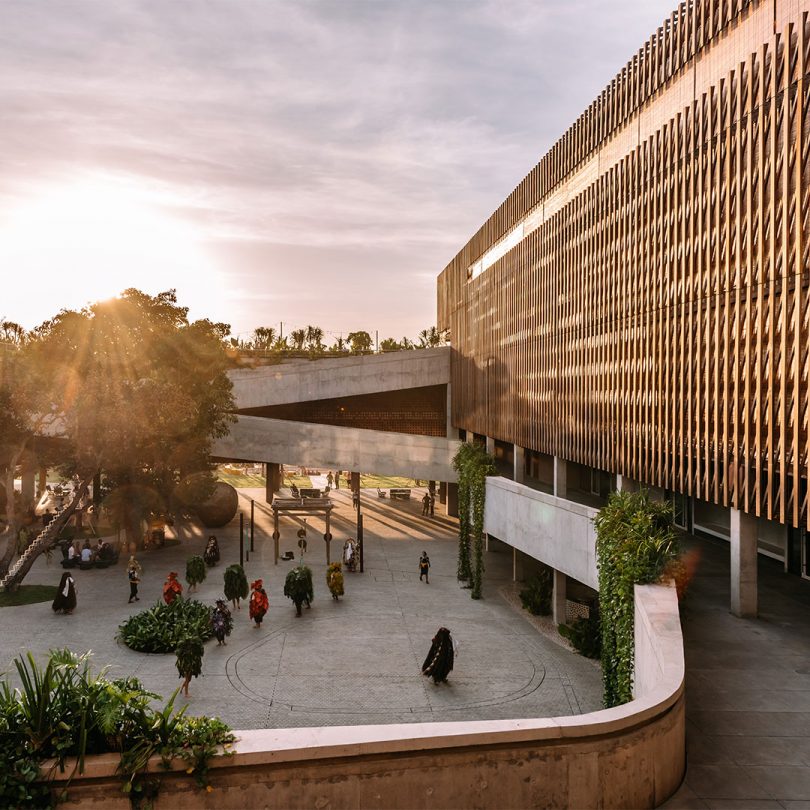 “At Desa Potato Head we’re not trying to change the industry, we want to create an entirely new model for it,” says Potato Head founder Ronald Akili. 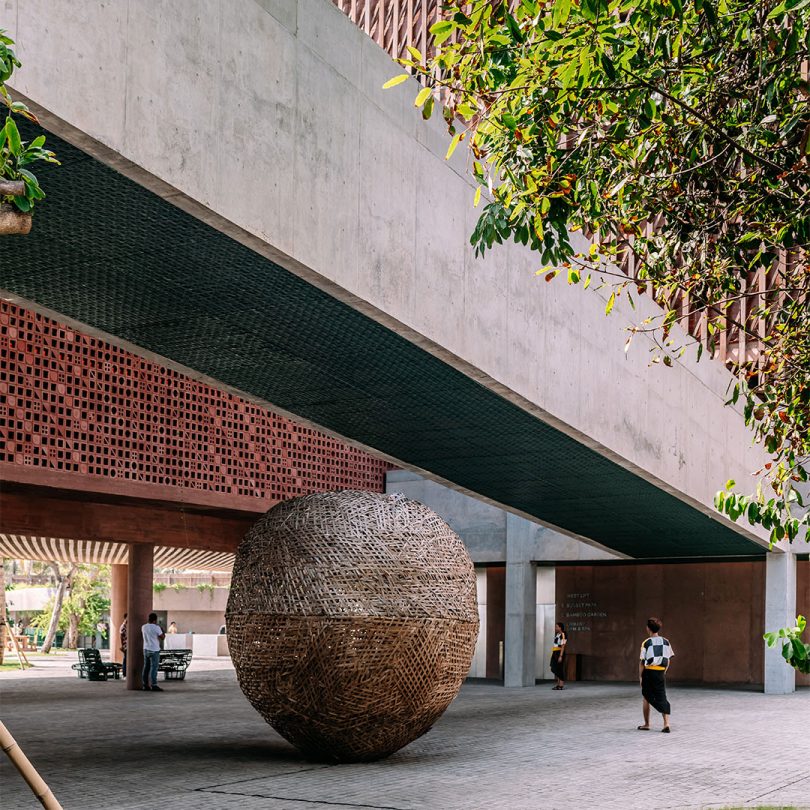 “If we bring people together for good times, but offer them the unexpected, it will open their minds in new ways,” he continues. “OMA is known for building public spaces, like museums and institutions, and that was our idea for the Desa: to create a type of cultural institution that mixes public with private, guests with locals, and future thinking with time-honored craftsmanship.” 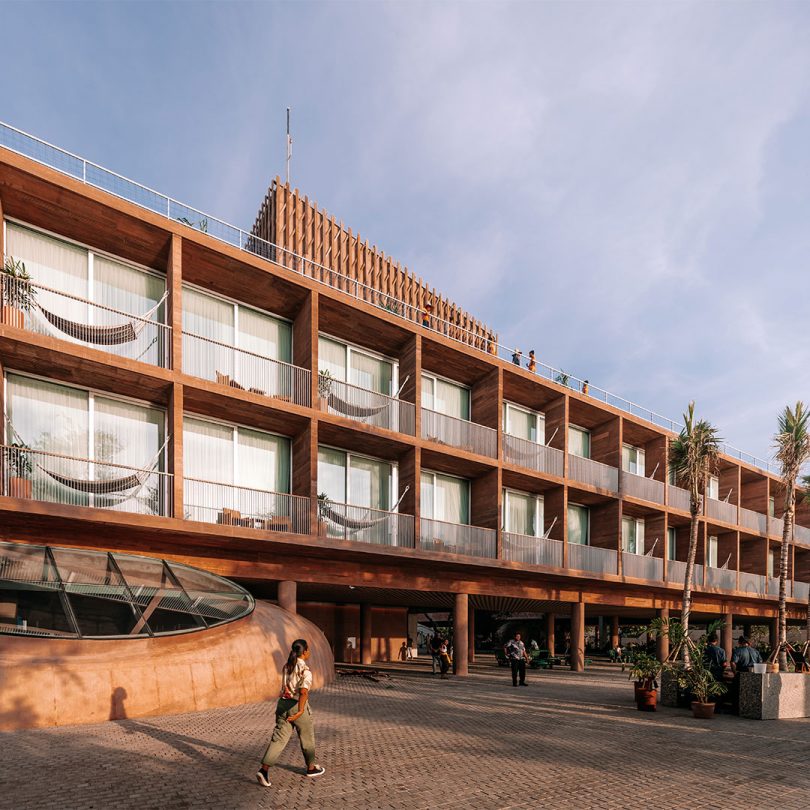 Inspired by the raised courtyards of Indonesia, OMA has lifted Potato Head Studios (one of three buildings, that contains the private guest rooms, a sunset bar, and an exhibition space, and, alongside Katamama and the Beach Club, forms the Desa Potato Head) on pilotis, creating an open cultural space below which leads to the beach and provides a flexible platform for festival celebrations, cultural events, and day-to-day leisure activities that are open to guests and locals alike – something that is particularly important when you consider that the development is located on one of the last remaining beachfront sites in Seminyak. 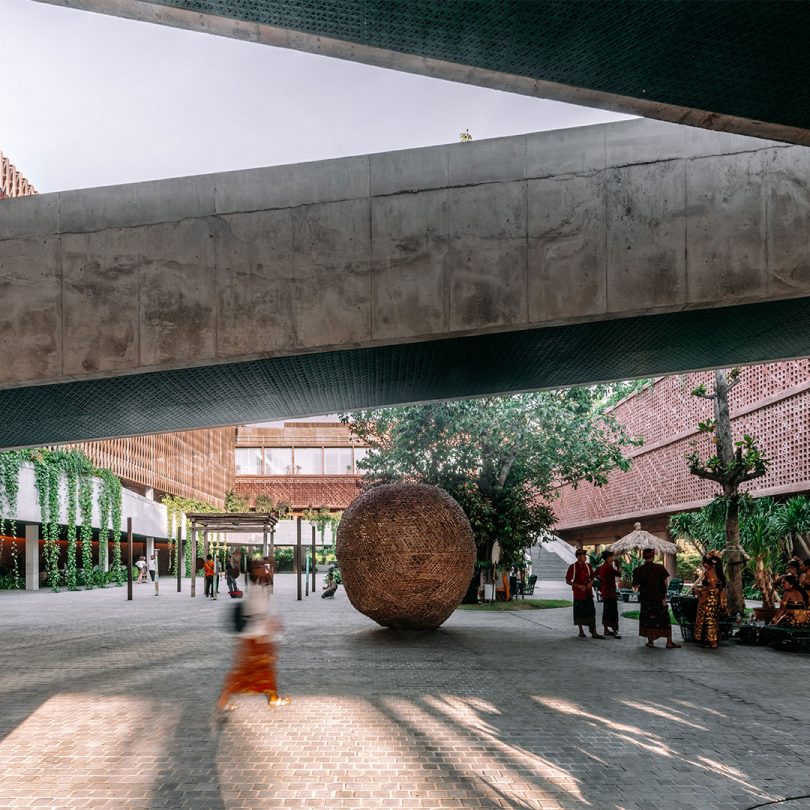 The roof gardens were also conceived as a public space and feature a sculpture park with sea views, accessible via a public route that zig-zags up the floating complex, connecting communal spaces such as restaurants, pools, and spas. 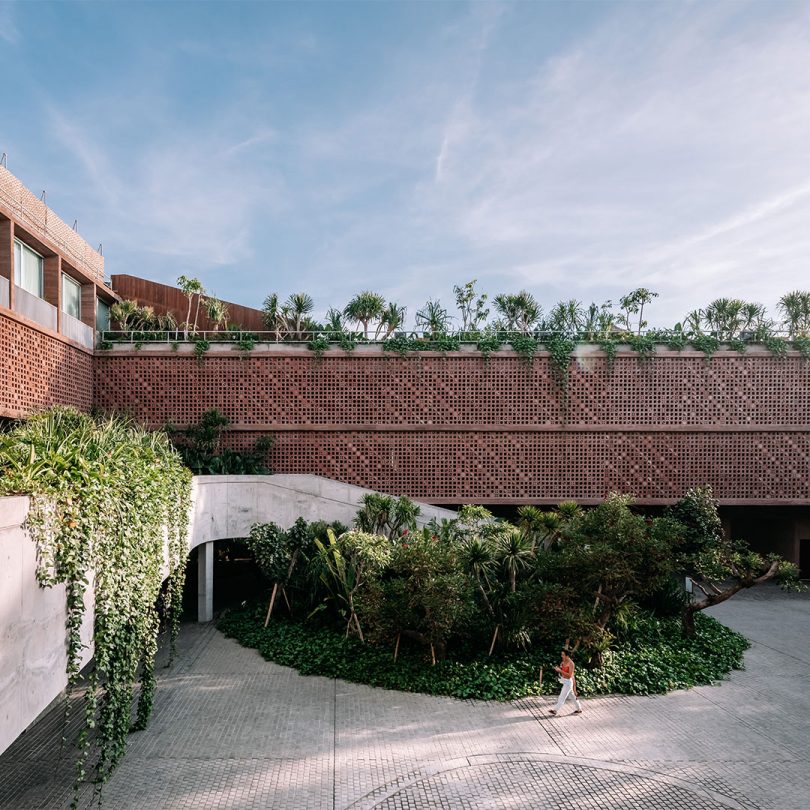 “The essence of Bali lies in the interaction between different cultures,” explains architect and OMA partner David Gianotten. “Our design for the Potato Head Studios offers both private guest rooms and facilities, and public spaces, to encourage exchange between different kinds of users, challenging the ubiquitous Balinese resort typology that paradoxically emphasizes hotel guests’ exclusive enjoyment, detached from the life of the local community.” 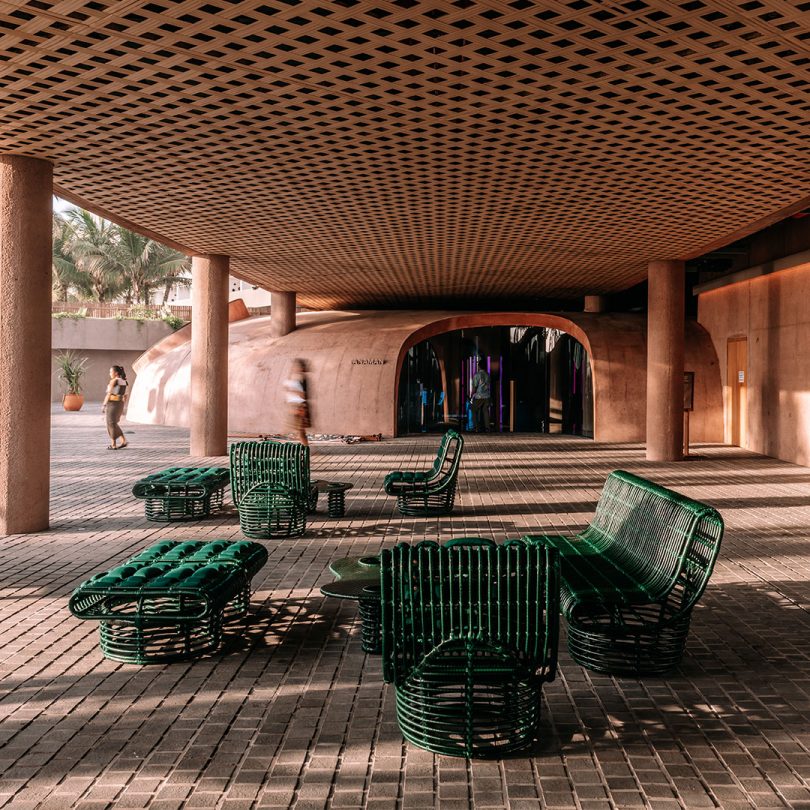 “The Potato Head Studios is a resort for open engagement rather than private consumption,” he continues. “It is a new space for the community where visitors of all kinds – hotel guests and the general public – experience contemporary Balinese culture, while making it.” 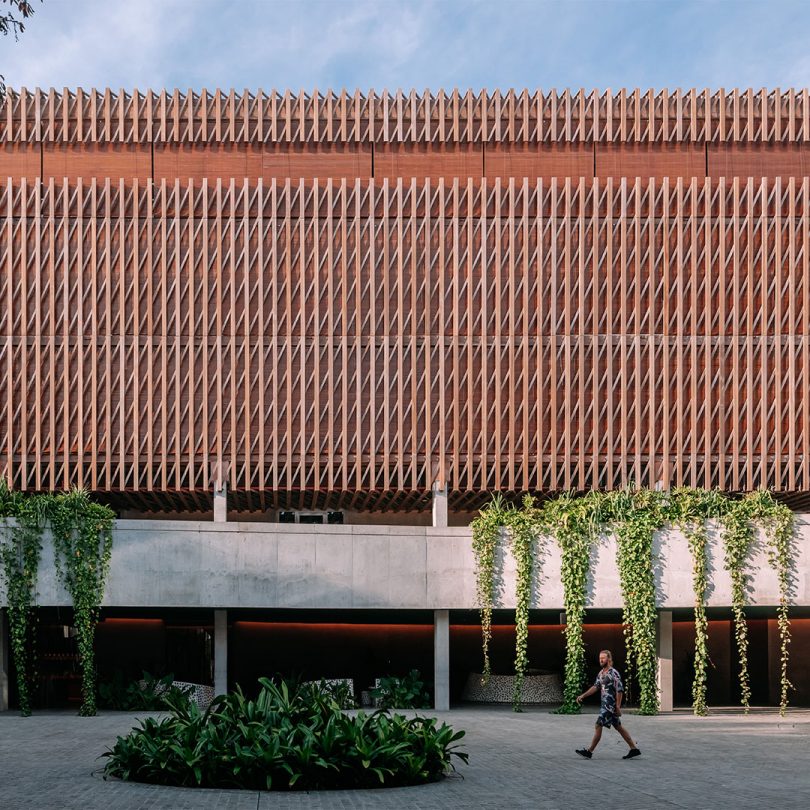 The visual language deployed by OMA is a departure from their signature style, and this is particularly evident in the facade, for which Indonesian craftsmen created the texture of the cement casing, using reclaimed wooden boards. Referencing Balinese culture, the corridor walls surrounding apartments were inspired by Tika, the Balinese divination calendar. 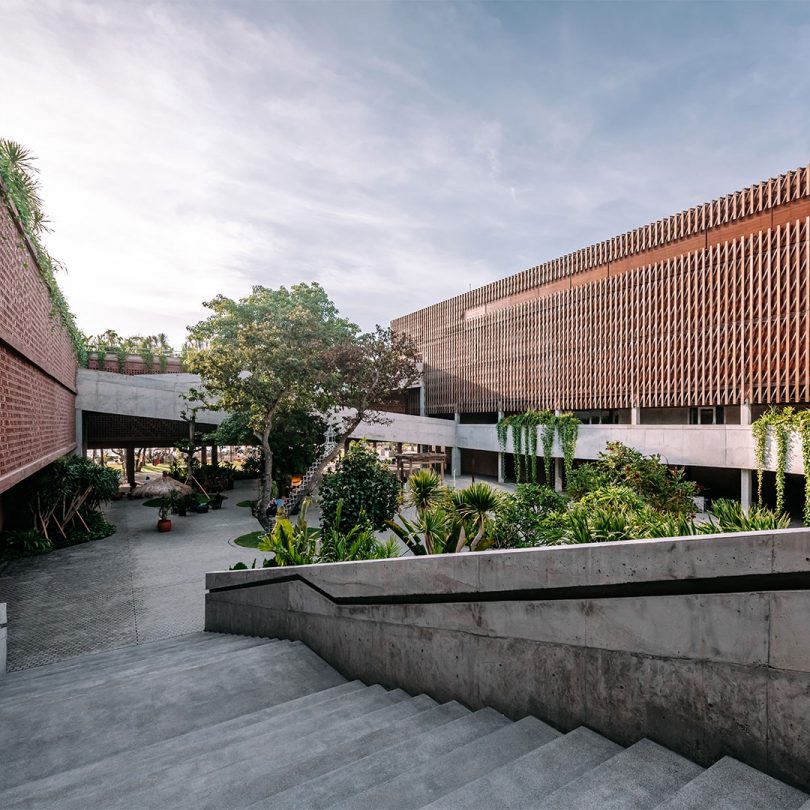 Extensive planting softens the imposing concrete structure and where possible materials are locally sourced and recycled – such as woven ceiling made from recycled PET (plastic bottles) made by local artisans, adding tactility, while respecting the Balinese arts and crafts tradition and the environment. 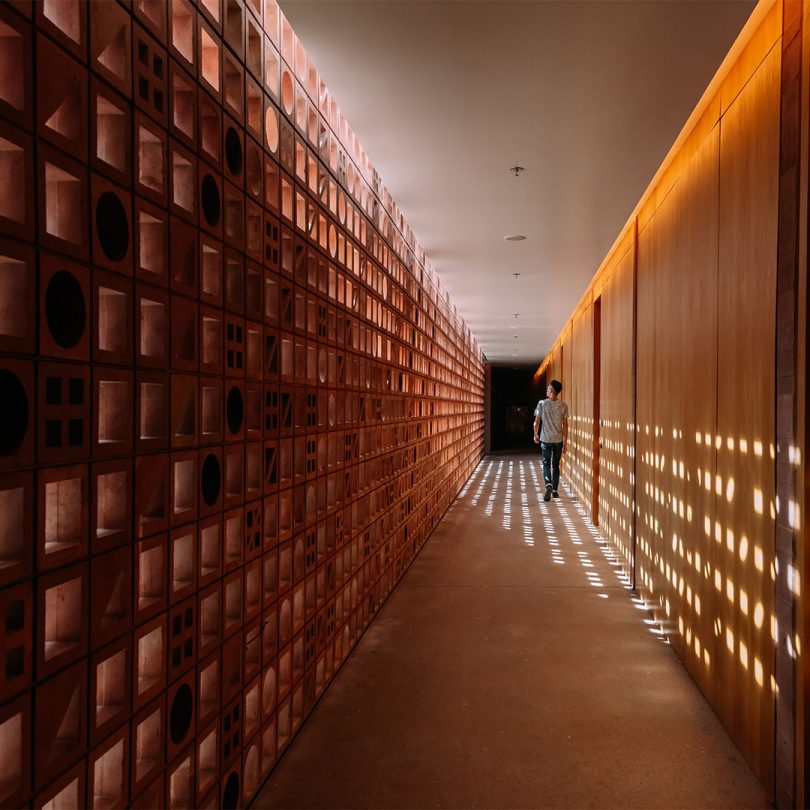 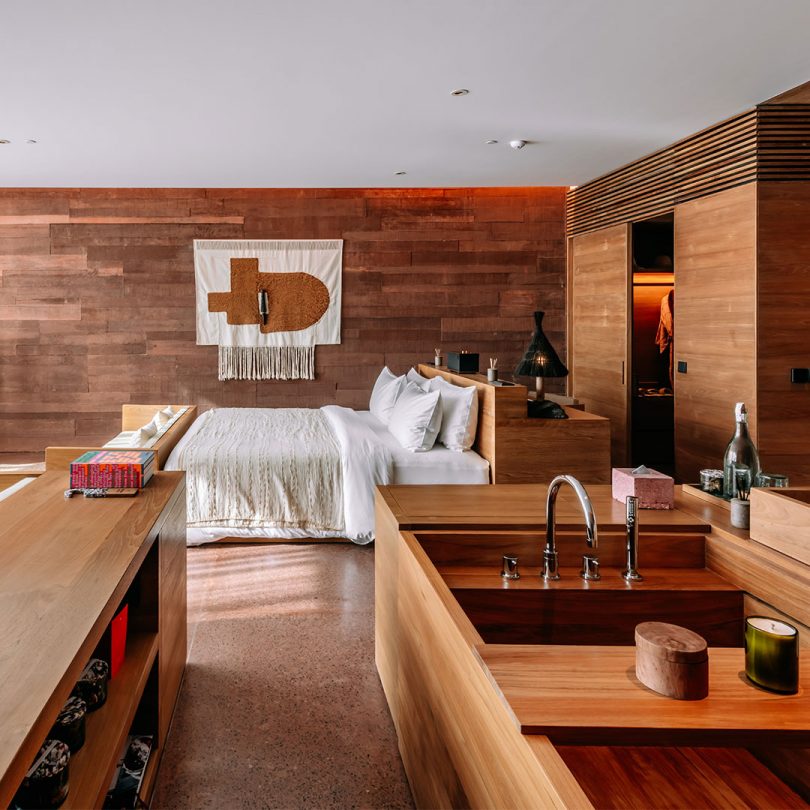 The bedrooms feature built-in bespoke wooden furniture and locally sourced artworks, and the pink terrazzo flooring is made from waste concrete. 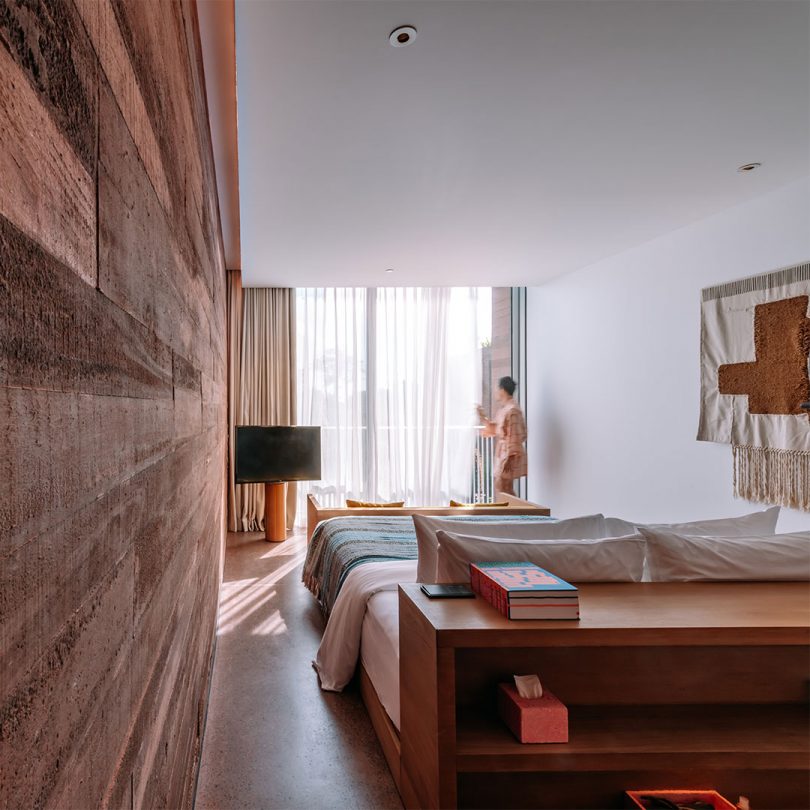 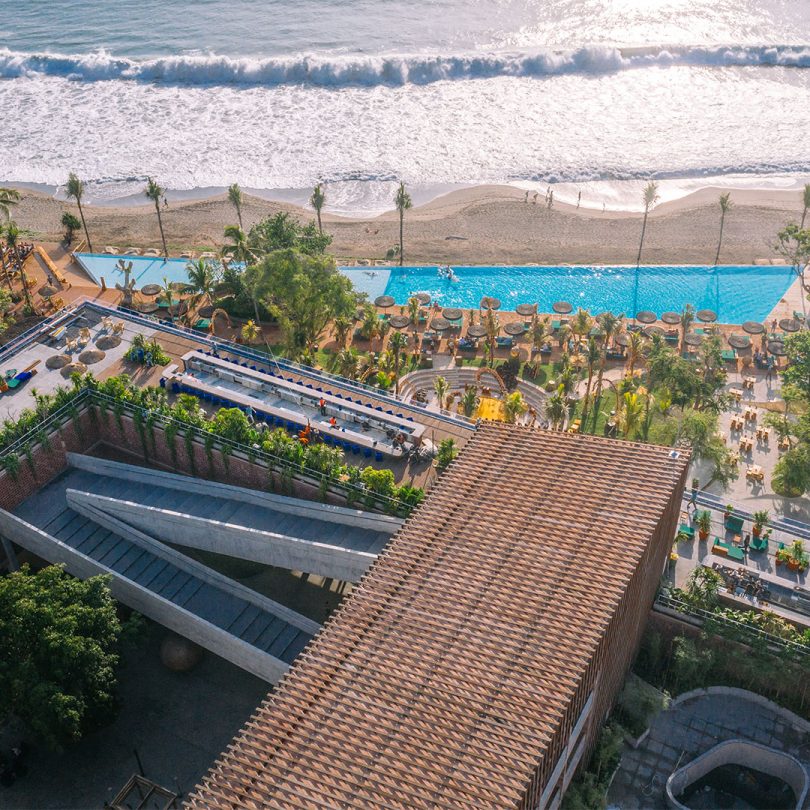